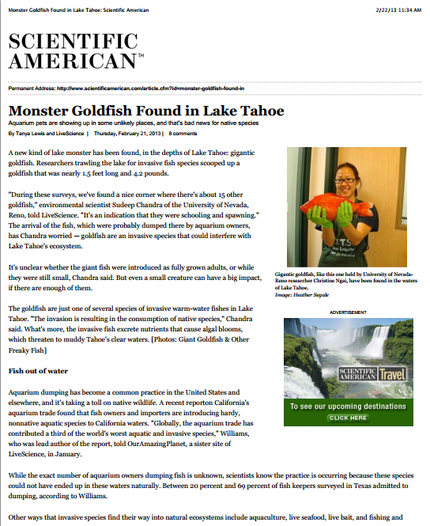 
Summary
In this article, a new kind of lake monster was found and you'll only find this monster fish in the depths of Lake Tahoe. Well this monster fish is a gigantic gold fish that they catch and researches said that the goldfish was nearly 1.5 feet long and 4.2 pounds. And since the Tahoe lake is a warm temperature level the researches said it's possible that gold fish can be gigantic and produce quickly because species like gold fish are often live in warm-water and they are easy to grow when they are in a right habitat with no harmless. But they are still curious how the gold fish turns to be gigantic. 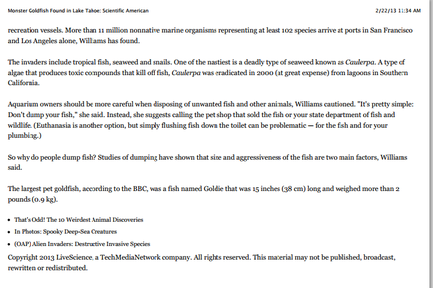 I pick this article because the title caught my attention and not only that as I read the whole article I was really surprise of goldfish being gigantic. I never knew that a little gold fish in a fish store can be 15 inches long and about 4.5 pounds. As, I read the article I found some more information and learned some causes how the fishes get big.

The Monster Goldfish was really fantasized because of how big and weight it is. Not only that researches found that more that 11 million nonnative marine organism representing at least 102 species arrive at ports in San Francisco and Los Angeles alone. And between 20 percent and 69 percent of fish keepers surveyed in Texas admitted to dumping. This is really interesting article of what I read and kind of creepy but still we need to take care of the environment of these species live because you don't want them to extinct like any other species.
Powered by