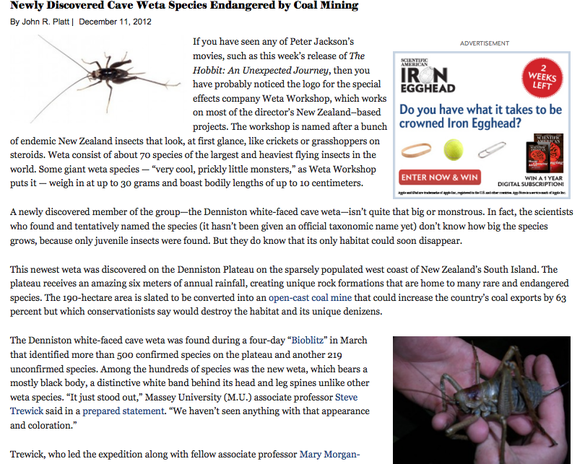 In this article, the Cave weta is a similar family related to grass hopper and crikets. It is mostly found in the cave of New Zeland. Explorer that discover this organism still trying to studies what is the weta about and where they produce. Many of the weta is discovered on the Denniston Plateau on the sparsely populated west coast of New Zealand’s South Island. The plateau receives an amazing six meters of annual rainfall, creating unique rock formations that are home to many rare and endangered
species.

I pick this article because the picture and the name of the topic brought me a lot of attention. And I learned and added one of the newest creepy creature in my list since I haven't heard about the weta.
Also, the facts of the weta was really complicated since it's only a little bit about it. But the interesting about the weta is that they mostly discoverd in New Zeland and gives the Island more unique about and I hope that some explorer should bring one here in U.S so more people can know about them too.

The weta is really a nice new creature to know about and nice to study because it has some missing facts. And Among the hundreds of species was the new weta, which bears a mostly black body, a distinctive white band behind its head and leg spines unlike other weta species. . The 190-hectare area is slated to be converted into an open-cast coal mine that could increase the country’s coal exports by 63 percent but which conservationists say would destroy the habitat and its unique denizens.
Powered by