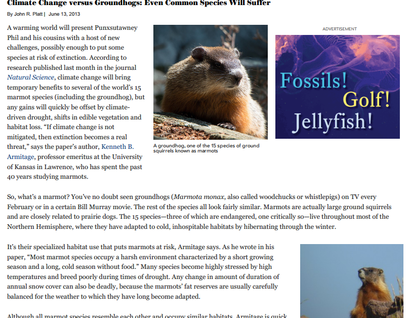 Summary
This article is about animals like a groundhogs being extinct cause of the climate change. According to the research published last month in the journal of Natural Science, climate change will bring temporary benefits to several of the world's 15 marmot species. But any gains will quickly be offset by climate driven drought, shifts in edible vegetation and habitat loss. One of the species that are affect of extinct cause of the climate change are the marmot. Marmot are groundhogs or they are called woodchucks. Marmots are actually large ground squirrels are closely related to prairie dogs. The 15 species- three of which are endangered, once critically so - live throughout most of the Norther Hemisphere, where they have adapted to cold, inhospitable habitats by hibernating through the winter. Like a lot of species we see everyday, groundhogs and most other marmots are probably too common to become truly endangered by climate change. 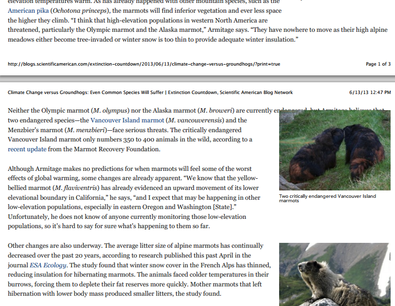 This article got me interesting to read because first I didn't know that animals can be endangered by the climate change and didn't know what is marmot species are also a lot of this groundhogs were endangered cause of the changes. Another thing I learned about this article was the amount of species were being extinct and the habitat it's destroying of the animals to live on. I picked this article because I learned some new things even though they are only a little but still gave me some new information about what is like to be a groundhogs. 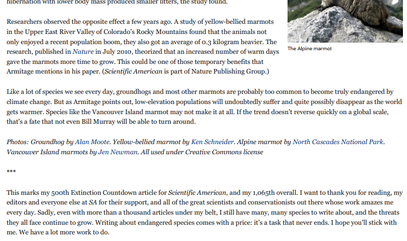 The facts and information that this article gave me was to get to know what is the marmot. And the type of environment they live on and what is like living in their habitat life style. The marmot actually has a lot of relationship with some other animals for example, the squirrel and bibers. But the most facts I learned was the climate change can make animals extinct.
Powered by