Vocabulary
Understand and be able to apply each of these terms.
1. Salinity –The saltiness or dissolved salt content of a body of water or in soil.
2. Plankton –Any organisms that live in the water column and are incapable of swimming against a
current.
3. Nekton –Refers to the aggregate of actively swimming aquatic organisms in a body of
water (usually oceans or lakes) able to move independently of water currents.
4. Benthos –The community of organisms which live on, in, or near the seabed, also known as the benthic zone.

5. Littoral Zone –Part of a sea, lake or river that is close to the shore.
6. Benthic Zone – Ecological region at the lowest level of a body of water such as an ocean or a lake, including the sediment surface and some sub surface layers.

7. Eutrophication –Ecosystem response to the addition of artificial or natural substances, such as nitrates and phosphates, through fertilizers or sewage, to an aquatic system.

10..River Mouth – Stream mouth, is a part of a stream where it flows into another stream, river, lake, reservoir, sea, or ocean.

11.Marsh –Type of wetland that is dominated by herbaceous rather than woody plant species.

12. Swamp –Wetland that is forested.

14. Lagoon- Shallow body of water separated from a larger bod of water by barrier islands or reefs.

16. Abundance –An extremely plentiful or over sufficient quantity or supply.

17. Diversity –Condition of having or being composed of differing elements.

18. Watershed -Carries water shed from the land after rain falls and snow melts.

19. Hydrophytes- Aquatic plants that have adapted to living in aquatic environments. These plants require special adaptations for living submerged in water or at the water's surface.

20. Halophytes- A plant that grows in waters of high salinity, coming into contact with saline water through its roots or by salt spray, such as in saline semi-deserts, mangrove swamps, marshes and sloughs,
and seashores.
Critical Thinking
Read, analyze, and give complete answers to these questions.

2. What causes high and low tides? Explain.  The High tides and low tides are both caused by the moons gravitational pull on the Earth.

3. Where would you find an estuary? What type of organisms would you expect to find there?
The estuary is located in the lagoons. Type's of organisms will be expected to be found are bacteria, and photosynthetic organism.
4. What is the definition of “freshwater”? Freshwater is water lacking a big amount of salt.

5. The mouth of a river can sometimes become “murky” because of all of the sediments that are
washed downstream. Name 3 problems are caused by “murkiness”?
The three problem that caused by murkiness are the decreasing amount of light, less light, less diversity of flora, and fish require less oxygen that can be found.

6. Name 2 types of fish that can live in low oxygen environments: Beta Fish, and Teleosti.

8. There are different types of marine reef environments. Define the following:
a. Fringing Reefs: A coral reef that lies close to the shore.

b. Barrier Reefs: A coral reef running parallel to the shore but separated from it by a channel of deep water.

c. Atolls: A ring-shaped reef, island, or chain of islands formed of coral.

9. Draw a diagram of a marine environment and define the following:

a. Intertidal: of or denoting the area of a seashore that is covered at high tide and uncovered at low tide.

b. Pelagic: of or relating to the open sea.

d. Benthic: of or relating to or happening on the bottom under a body of water 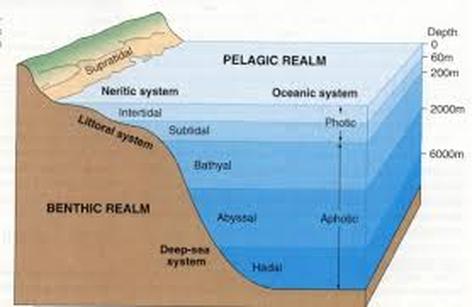 10. What is “winterkill” in a lake? What happens?
The winterkilla in a lake is when the lake starts to frozen up leaves with a thick layer of snow that reduces oxygen in the lake.

12. Explain how lakes “turn-over” yearly and what this process causes. Name one positive and one negative
aspect of turn-over.

13. Draw a diagram of a lake and define the following:
a. Littoral Zone: the region of the shore of a lake or sea or ocean

b. Limnetic Zone: is the well-lit, open surface waters in a lake, away from the shore. The vegetation of the littoral zone surrounds this expanse of open water and it is above the profundal zone.

c. Profundal Zone: a deep zone of an inland body of freestanding water, such as a lake or pond, located below the range of effective light penetration. 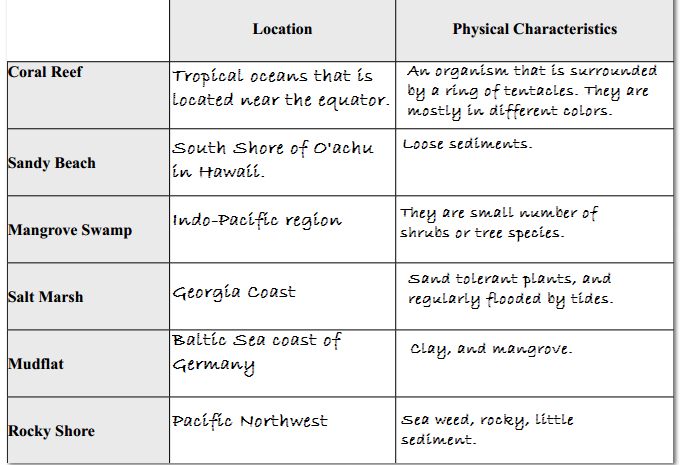