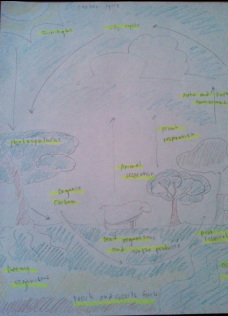 2. How does carbon exist in the atmosphere?
Carbon's is always attached to the oxygen and it form into carbon dioxide, and it is pull from the air to make the plant food.

3. How are fossil fuels created? Explain.
Fossil fuels is created when the natural resources and organism extinct and decay. Also the carbon from the animals or plants goes to the ground and that becomes fossil fuel.

5. How are the oceans involved in the carbon cycle?
The oceans influence the climate by absorbing the storing the carbon dioxide.

6. How is the temperature of the Earth partly controlled by carbon?
The gasses cover the earth and stops same heat from getting back out in to space which causes the world to heat up.

7. What role do rocks have within the carbon cycle?
As rocks are eroded gases trapped in them will be released into the atmosphere so in a way rocks use as a storage for gases just as our Earth is.

8. Where are you starting within the carbon cycle?
The movement of carbon, in its many forms. Between the biosphere, atmosphere, oceans , and geosphere.

11. Next stop = Land Plants
What did you learn?
I learned that the sun's energy and plants takes CO2 out of atmosphere to get a nutrition. And plants releases CO2 to atmosphere by respiration.

12. Next stop = Soil
What did you learn?
I learned that soils is made out of inorganic parts such as salt, silt, and clay. Soils stored
about 3% of Earth's carbon. As bacteria and fungi breakdown the detritus, carbon is sent into the atmosphere.

The deep ocean accounts for more than 65 % of the Earth’s carbon.

True or False: When plants die and decay, they bring carbon into soil.
True.

13. Next stop = Surface Ocean
What did you learn?
The ocean absorbs more carbon dioxide from the atmosphere than the land does.
The surface ocean takes in approximately 90 Gigatons of carbon per year. Cold water absorbs carbon faster than warm water.

14. Next stop = Marine Life
What did you learn?
Tiny marine organisms called phytoplankton take in carbon to make the nutrition they need through a process called photosynthesis.Marine life cannot survive without carbon, but high levels of carbon disolved in ocean waters are harmful to marine organisms such as algae, mollusks and corals.

15. Next stop = Deep Ocean
What did you learn?
The deep ocean holds more than 65% of the Earth's carbon.
The deep ocean gets carbon from circulation with the surface ocean and dead and decaying marine life.

When carbon enters the deep ocean, how long does it stay there?
The carbon stays in deep ocean for 100 years.

True or False: Phytoplankton are tiny plants and algae that float in the ocean and take up carbon
dioxide as they grow.
True