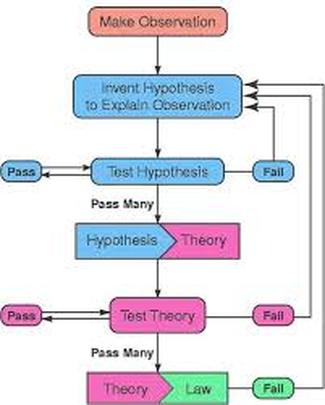 Science as a Way of Knowing:
What is Science?
-The intellectual and practical activity encompassing the systematic study of the structure and behavior of the physical and natural world through observation and experiment.

Science Theory:
-Is concerned with the assumptions, foundations, methods and implications of science. To these central problems for science as a whole, many philosophers of science consider these problems as they apply to particular science.

Hypothesis:
-A supposition or proposed explanation made on the basis of limited evidence as a starting point for further investigation.

Variables:
-There are variables that are independent , or dependent and the control variable better as it says the same throughout the experiment.

Repeatability:
-The ability of a scientist's experiments and results to be replicated by other scientists.

Data:
-It's a data that works with quantitative numerical or non-numerical.

Scientific Method:
-A method of procedure that has characterized natural science.
-Consisting in systematic observation, measurements, and experiment.
-Formulation , testing, and modification of hypotheses.