Define the following and give examples of each:
• System: a set of connected things or parts forming a complex whole, in particular.

• Open System: a system in which the components and protocols conform to standards independent of a particular supplier.

• Materially Closed System: Which no matter moves in and out of the system.

Why is the idea of equilibrium in systems somewhat misleading in regard to
environmental questions? Is the establishment of a balance of nature ever possible?
The concept is a somewhat antiquated attempt to ecologically model the steady state or equilibrium of natural systems. Nevertheless, most people subscribe to the idea that there is some basic state of ecosystems that we can determine and which will continue into the indefinite future if human disturbance is not excessive.

Why is the concept of the ecosystem so important in the study of environmental science?
Should we be worried about disturbing ecosystems? Under what circumstances should
we worry or not worry?
The ecosystem is one of the most important system on earth because if we lose this from everyone then we will not have a earth. Earth will be just a place where there is no life because all the animals are gone and then we cant eat any meat. We will have to be herbivores and just eat plants all day.

Define: Average Residence Time (How is it calculated?)
The average residence time is a measure of the time it takes for the total stock or supply of the material to be cycled through a system.

Discuss the difference between positive and negative feedback loops. Give an example of
each.


Define: Flow: move along or out steadily and continuously in a current or stream.


Flux: the action or process of flowing or flowing out.

• Lag Time: The delay between a cause and the appearance of its effect.


• Exponential Growth (What is the main idea- is it good or bad?)
• Doubling Time: Time necessary for the quantity being measured to double.

• Overshoot and Collapse (draw and label the graph) The carrying capacity, the decrease.

Why does overshoot occur, and what could be done to anticipate and avoid it?
Overshoot occur because its based on an assumption of hard limits to resources. By improving global environmental governance, and our ability to manage the Earth's resource is thus a key part of any solution.

Discuss the idea of Environmental Unity.
The idea of it being impossible to change only one thing since everything affects everything else.
Discuss the idea of uniformitarianism
The idea is the geological and biological processes that occurs today are the same kinds of processes that occurred in the past and vice verse.
What is the Gaia Hypothesis?
The hypothesis states that life manipulates the environment for the maintenance of life. 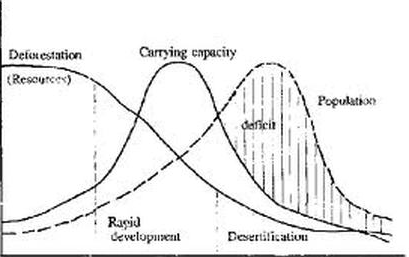