5. What are the three ways that primary productivity can be measured? Highlight the way will be
used in this lab?.
a. We can measure net productivity directly by measuring oxygen production in the light, when photosynthesis is occurring.

B. LAB PART 1: EFFECT OF TEMPERATURE ON DISSOLVED OXYGEN

7. Explain why this relationship exists.
The Oxygen in essential for cellular respiration in most organisms such as, aquatic environment, oxygen availability is influenced by a variety of chemical and physical factors.

C. A model of productivity as a function of depth in a lake.

9. Why do we take an initial reading of dissolved oxygen? What purpose does this serve in the
experiment?
To find the amount of light available for photosynthesis drops off sharply with increasing depth in an aquatic environment.

10. Click on the “closer look” magnifying glass on the “initial bottle”. Why does the animation show
oxygen being diffusing out of the freshwater plants? What does this signify?
When the oxygen is used up in respiration then the oxygen adds more off in photosynthesis.


11. Click on the “closer look” magnifying glass on the foil- covered bottle. Why does the animation
show oxygen diffusing into the freshwater plants? What does this signify?
Oxygen is used up in respiration then their are no photosynthesis occurs. 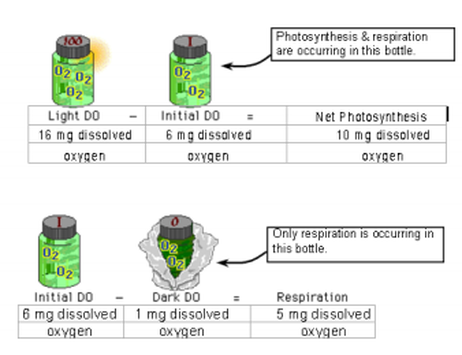 The 10 mg oxygen gained from photosynthesis and add it up to 5 mg oxygen lost to respiration so that equals to 15 mg oxygen as gross productivity.
15. Measuring Net Productivity: Remember net productivity is the amount of sugars and dissolved
oxygen produced by the plants in an ecosystem once you subtract out what the producers have
consumed in respiration. So we actually already calculated that in the last example; I just called it
“net photosynthesis.” Explain why this calculation works. 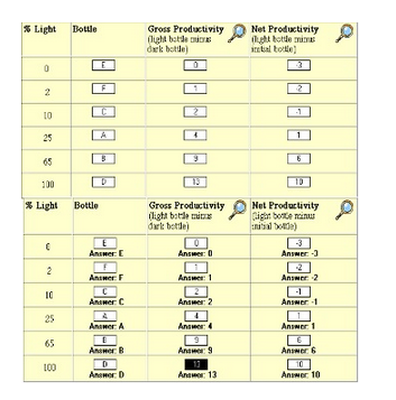 17. Print out the Lab Quiz and attach it to this lab to show me that you completed it.

20. One of the major sources of water pollution is the runoff from fertilizer used in agriculture and on
suburban lawns as well as golf courses. In particular, the nitrogen and phosphorus nutrients in the
fertilizer creates problems in the streams and ponds it flows into. They cause algal blooms and
eutrophication in lakes.

a. Why do nitrogen and phosphorus promote a lot of plant/algal growth?
Both are considered limiting factors in vegetative growth. Both are two of the main components (potassium is the third) found in fertilizers.

b. What is meant by algal bloom? (Look it up!)
Is the visible appearance of millions of tiny plant-like organisms in the water. These tiny algae, or phytoplankton are present all year.

c. What problems do algal blooms cause in ponds & lakes? Why isn’t a lot more producers a good thing?
(Look it up!)
This creates problems for any underwater vegetation because the sunlight it needs to grow is being blocked out by all of the algae growing above it.

d. What is meant by eutrophication? (Look it up!)
Excessive richness of nutrients in a lake or other body of water, frequently due to runoff from the land, which causes a dense growth of plant life and death of animal life from lack of oxygen.

21. At what depth—shallow or deep—will there be more primary productivity in a pond or a lake? Explain.
All production happens at the meeting of two phases. Water and air, water and dirt, leaf and sunlight, etc. I don't know what is considered "primary" but it has to be near the surface. 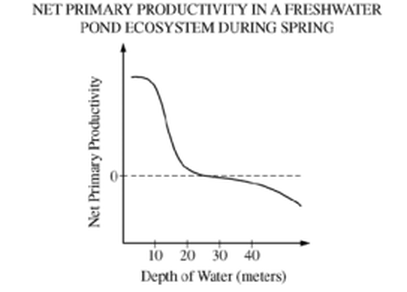