17. What are the two compounds that are formed when nitrogen combines with oxygen?
The Nitric and Nitrous oxides.

18. How does nitric acid (HNO3) form?
It's form when nitrogen dioxide reacts with water in rain.

19. Why is nitric acid (HNO3) important?
It's important because plants utilize it as a nutrient.

21. Even though considerable nitrogen is available in the air, most plants do not use the nitrogen
(N2) found in the air. Why not?

24. Atmospheric nitrogen (N2) is pretty inert. This means that it does not easily break apart.
When molecules do not break apart easily, it is difficult (or impossible) for organisms to use
them as a nutrient source. As a result, nitrogen fixation is the term used to describe the
process of breaking up N2
.
a. What is atmospheric fixation?
Is relatively inert and it does not easily react with other chemicals to form new compounds.

b. What is industrial fixation? [This is how artificial fertilizers are made.]
Is a process that causes free nitrogen in the air to combine chemically with other elements to form more reactive nitrogen compounds such as ammonia, nitrates, or nitrites.

c. What is biological fixation? (In your answer, describe the types of plants associated
with the symbiotic relationship.)
Some free living bacteria are able to fix nitrogen and assimilate it as organic nitrogen. 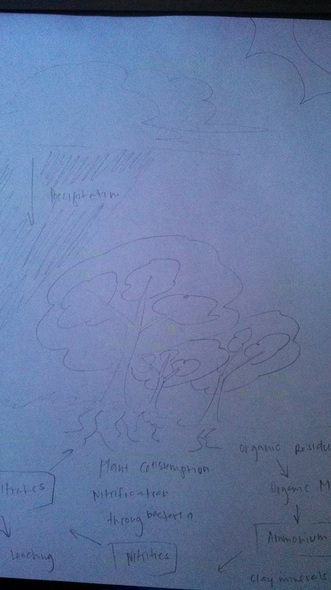 26. Why is nitrogen needed by plants and animals?
Nitrogen is needed for animals and plants because they use nitrogen to produce complex organic molecules like amino acids, proteins, and nucleic acids.