Topic Introduction:
Ocean acidification is the name given to the ongoing decrease in the pH of the Earth's oceans, caused by their uptake of anthropogenic carbon dioxide from the atmosphere. Also it provides 79 million tons of carbon dioxide (CO2) released into the atmosphere every day, not only as a result of fossil fuel burning but also of deforestation and production of cement. About 1/3 of the CO2 released in the atmosphere by anthropogenic activities has been absorbed by the ocean. The impacts of ocean acidification on marine ecosystems are still poorly known but one of the most likely consequences is the slower growth of organisms forming calcareous skeletons or shells, such as corals and mollusks.

Hypothesis: Bubbles Protocol-
In this lab, when my partner Leo start blowing into the the bicker, she starts to exhaling all the carbon out of her body and actually blowing CO2 gas. As, she kept blowing in the beaker the color liquid inside starts to change its color. The cause of the color change is because of too much carbon releasing and get's trap inside. Also, the point of this lab is that we are actually measuring the color change of the water by its pH. And it will show us that if the water is too acidic or basic.

Hypothesis: Shells Protocol-
The shells protocol project, when me and my partner Kirk have a two similar beaker but inside the beaker we put sea water vs. vinegar, and we both predict that one of the shell will stay in control variable and one of them will be change cause of the affect of the vinegar. Also, we knew that the sea water has less pH than the vinegar so we knew what's going to happen afterwards we start the lab.

Protocol:
The protocol I used in the bubble lab is the sea water and the hair color. For the shells lab i used the sea water, vinegar and also observing the strips of the shell. For the both experiment the dependent variable is the composition of the water and the independent variable was the reaction of the carbon dioxide. At last, the constant was the amount of liquid we place on the beaker. 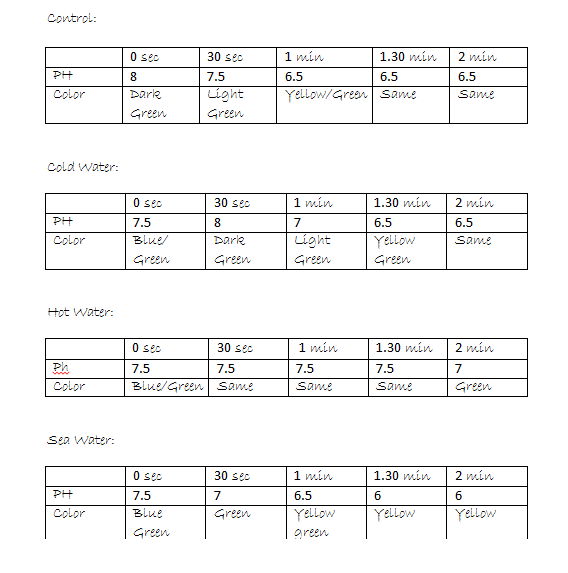 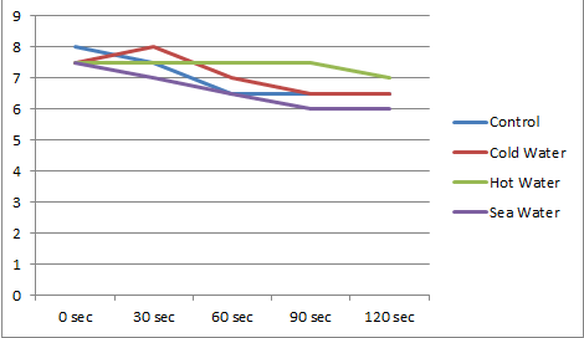 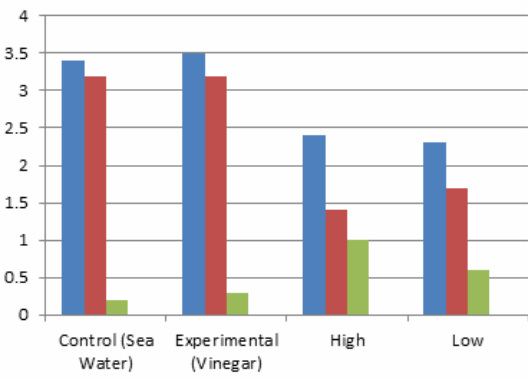 Post Lab:
1. What gas are you blowing into the water? Carbon Dioxide (CO2)

2. What happens to the gas when you blow it into the water? The gas is being absorbed.

4. What does measuring the pH of the water tell us? It tells us if the water is acidic or basic.

5. After studying the reactions above, how do you think carbonic acid will affect the pH of salt water? CO2 + H2O --> H2 CO3 (Carbonic acid).

Data Analysis:
1. As you blew through the straw, what were you adding to the water and how did that change the pH?
Adding more carbon.
2. What did the universal indicator tell us about the water?
The universal indicator told us the pH of the water without having to use the test strips.
3. What does this tell us about the effects of carbonic acid in ocean water?
When we placed the carbonic acid to the sea water it slowly turns the water color to acidic type color.
4. Based on the result of your experimental protocol, which factor affects the pH of the water most, temperature or salt?
The most experimental protocol that affects the pH was the temperature.

Conclusion-
My initial hypothesis was right because during the lab the more it adds time the water turns more acidic. I learned a lot about the ocean acidification. The first thing I learn was about that the place that we are living on is full of acid, and also when its too much acid to the atmosphere it forms and make into this big Carbonic Acid. The carbonic acid can effect into oceans by destroying the shells of a organism and only that it can actually affect us.