Purpose:The purpose of this lab to mimic the mark-recapture technique, that is performed when estimating population.
Background:Sampling is a technique used to estimate population size, where organisms in few small areas are counted and are projected to the entire area. Another way to determine populations is tagging. The purpose is to track migration patterns, health and range. It is also a way to help determine population numbers. After taking random samples and finding the percent tagged, biologists can hypothesize the population in the area.
Procedure: 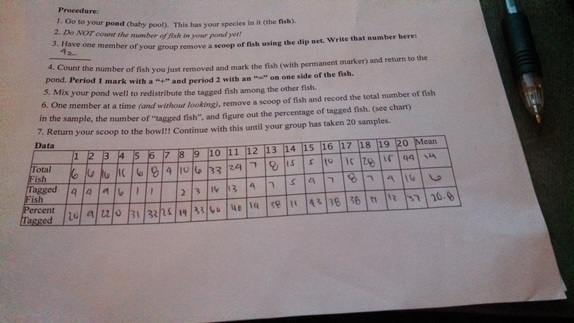 1. What is the mean (average) of your percent tagged fish from your 20 samples?
26%
2. Using the following formula, determine an estimated population for your pond: Population Size= [Total # captured*number marked (line#3 above)]/total number captured with mark
40

5. What concerns should a biologist have about a species' habits before (s)he uses this method to approximate the size of a population?
The species might have migrated to a different area, therefore the biologists are unable get the information they need.

Conclusion: How did you fulfill the purpose? What did you learn?
I learned how to estimate populations with different methods, like sampling, tagging and mark-recapturing.
Powered by