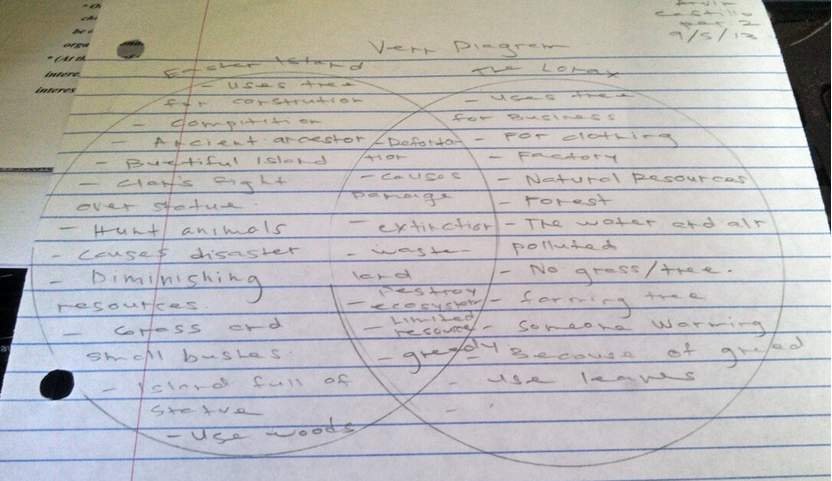 The Essay
What do you think would happen if we took advantage of other living things and abuse them? Do you think we will be the first one that will extinct if we always use the resources daily and not to plan for the future? Well "The Lorax" by Dr.Seuss and "The Easter Island" by Jared Diamond both have the same similar stories of what it feels like to be taking advantage and been abuse. They also had differences to become extinct from the people actions and from the selfishness of just thinking from ourselves.

In "The  Lorax", the Onceler finds a place where he can cut down all of the Truffula trees that can be lead to a short of time for the other natural resources such as, the animals and other living things that lives with the Truffula trees, as in the Easter Island the Polynesian that took advantage of the Island and created their own civilization and causes major of pollution by cutting all the trees. Also, not only they cut all the trees in the Island they even killed every single living things such as, animals. And they both causes deforestation that turns out to a place to be a wasteland. Another thing, is in the Lorax it made the civilization grow so fast and the economy quickly it turns out that the Onceler didn't realize of what effect it would turn out to the future if he didn't take care of the Truffula trees. Furthermore, the Easter Island turns only to be "subtropical forest of trees and woody bushes towered over a ground layer of shrubs, herbs, ferns, and grasses" (Page 3). The Polynesians uses all the natural resources to help them make the huge and gigantic statues. They even set a competition that also live in the Island and decided who can make the more statue.

The Easter Island was a paradise for the animals and plants until the settler called the Polynesian. They took advantage of the Island and created their own civilization. The Polynesian was so aggressive to the Island that they cut down every single trees and use it for their resources. And they even killed every animal that is living in the Island and quickly, which causes of the extinction. Well it's similar thing that  happened to the Lorax, but the Onceler cuts down the Truffula trees and used them to make coats. Also, there was one animal that reminds the Onceler to take care of the trees before they all die in the future but the Onceler didn't listen as the time of extinction hits in the Lorax all of the Onceler resources came down so fast; that his place become polluted. No animals nor trees was living but only bushes and shrubs was only growing. The both topics turns out to be in a same condition. As a result, their environment became polluted and unpleasant to live in.

Today, the Lorax can be related to the economics of the world. If we don't take care of our resources it can lead to losing our business and properties that we worked hard for. Another thing about the Lorax is that, it has the same position of the other people that lives near the factories. For example, in Los Angeles, CA. it has large a factories business that were established. Also,  many people are living in that area. Most of the residents have health problem due of the bad smoke that comes out from the factories. Moreover, its polluting the environment, the animals, and the whole earth.

In the conclusion, cutting down of all the natural resources on the Easter Island caused the  disaster and extremely extinction.  As we can see it is a lesson to be passed on to our future generations. In reality, what happened in Easter Island was the result of killing the resources. Furthermore, the story of the Lorax is another example to learned from. We, people should realize to treasure our resources and treat it nicely and effectively.
Powered by